As a child, my mother always told me to never leave my plate completely empty. She said to leave just a little bit, it makes you look refined and that you had enough of whatever was given to you, no matter how hungry you truly are. While it never really made much sense to me, I always kept that tradition. Then I went to Lamarca.

Randomly googling for a pasta joint in the city led me to Lamarca, a wonderfully warm and quaint Italian restaurant on the Lower East Side. I’ll spare you the details on the ambiance and get straight to the main course I had, their Lasagna made only on Thursday and Friday. I never had lasagna at a restaurant, quite frankly, I have only had lasagna whenever my family made it and one time my friend experimented making his own. While those efforts were good this one totally blew them out of the water.

The meat lasagna was served in a round bowl, something I was not expecting. Topped with parsley, it left a rich range of flavors in my mouth compared to the standard pasta sauce and cheese. One of the coolest things about this lasagna was that it was sitting in a pool of meat sauce, which had some beef mixed in and also added to the flavor. The lasagna itself did not have meat in it, which was another break from tradition for me because the homemade lasagna my family made in the past were filled to the brim with meat. The winning combination allowed me to fully appreciate the flavor of the sauce and noodles, all which were excellent. The Parmesan cheese offered really topped everything off. So good in fact that Nicole noted that my plate was completely clean. I did not even realize that I broke a 22 year tradition. It was THAT good.

I advise anyone that has an extra 20 dollars on a Thursday or Friday to head down to Lamarca and prepare to be amazed. I know I was. I eat like a truck driver, but every now and again something good like this comes my way. So good I had to share.

As promised, kingwich and I made a visit to Dallas BBQ. I had the pleasure of being there for their recently launched drink: the Funny Bunny Royale. I do not eat barbecue very often, but when I do I expect it to be tasty and filling and Dallas BBQ filled that quota.

Before even choosing our entrees, kingwich and I tasted the “Dallas BBQ sauce” to see what it would be like. The best explanation of the taste would be to compare it to a smoky flavored ketchup. So instead of getting barbecue chicken, I went ahead and got Honey Battered Chicken and Crispy Shrimp with french fries and corn bread. What could be better?

One thing I typically do not like to do is get my hands dirty, and you might think it’s strange that someone like me would go to any barbecue spot. Yet, I still love barbecue. The Honey Battered Chicken was not only sweet and syrupy (in a good way) but so tender that someone as fidgety about dirty fingers as myself, could eat it with a fork. Also, the french fries were crunchy on the outside, fluffy on the inside – just how I like it.

My dislikes were the shrimp and the cornbread. And don’t get me wrong, they were not bad. But they did not have any oomph to them. They were just there. Maybe the honey batter overwhelmed my taste buds, maybe not. I could have gotten the same crispy shrimp anywhere else and I could have made the same cornbread (probably better).

The 100 percent winner of the night had to be the Funny Bunny Royale:

Although, this was apparently supposed to be purple (source: https://www.facebook.com/dallasbbq) and mine is clearly on the pink side, I thoroughly enjoyed it. The Funny Bunny Royale is a purple/pink Long Island served with Moscato and a shot of rum. It is difficult to explain the taste of alcohol, but if I had to explain the taste in terms of how it made me feel, this drink had me wishing I could have one every night -and I am not a big drinker.

If you want a restaurant that is not serious or something new, go to Dallas BBQ. If you’re not a fan of their barbecue sauce, definitely try something battered in honey, or hurry to get their Funny Bunny Royale and share it with a friend or loved one.

You won’t regret it 😉

And don’t forget your wipes

Hello everyone! My name is Ariel Martinez and before I begin my little review on a decent sandwich I had a couple of days ago, I’d like to let you guys (and gals!) know a little about myself. I’m a simple man. A man sort of behind in the times, a man who isn’t on any social media or even likes using his phone. Hell, the only reason I got rid of my old Galaxy 2 was because it was at a point in its life where no matter how much I tinkered with it, no matter how much I prayed to the heavens for just one more day of use… it was dead. Shucks. If we have any Parks and Recreation fans out there, I have been compared to Ron Swanson a bit too often. I hope that paints a picture of the person I am. Except that I don’t boast one of the most beautiful mustaches on the planet.

Very much like Ron Swanson, I am a big fan of American cuisine. Burgers, Ribs, Cheese steaks, Apple Pie, you name it. I’ve never had a salad and I intend to keep it that way. There’s a certain science to making the perfect burger, the perfect ribs which always leads me to try new places and certainly be open to try anything that ANYONE recommends me (seriously guys, any burger BBQ American cuisine locations you guys can recommend in the NYC area I will go to). A couple of days ago, I had the pleasure of going into City Kitchen in New York City. Nicole commented on the history of City Kitchen and what was in store there but the first thing I noticed while walking in was a bustling and maybe even a bit cramped center of great food. Its like the food court in your local mall but just replace teenagers with hipsters. A lot of hipsters. The particular establishment I decided to chow down on that day was Whitman’s.

Whitman’s is a burger joint whose main restaurant is located in the East Village. It makes the food we’re guilty of loving but using locally grown ingredients. If I can enjoy a burger and help local farmers, I have done my patriotic duty as an American. I decided to try their cheese steak which looked amazingly appetizing on their online menu. When I received mine it looked awesome! However there is one fatal flaw…. I had to put ketchup on it!

Now that shouldn’t be! A cheese steak should carry the flavor all in it self without any extra sauces or condiments. The steak should be seasoned to the point where the cheese compliments the flavor of the steak. When I first took a bite, the cheese was the only thing I tasted. The cheese was fine, a very smooth buttery taste whose texture added to the overall smoothness of the steak. However, the main ingredient left my taste buds wanting a little more. The fries, a corner-stone to any sandwich, were very small. I wondered whose hands they were designed for. They were however, some of the best fries I have ever had. It was a roller coaster of flavors which started with a very crunchy outside followed by a very fluffy inside. It had a very enjoyable salty after taste which sat well in my mouth when I followed it up with another fry. I found myself eating the fries before I even took a single bite out of the sandwich, it was that good.

Whitman’s cheese steak is a fine sandwich for lunch on the fly but for more seasoned cheese steak veterans, it lacks the fantastic seasoning that other dedicated cheese steak places offer. But their fries are out of this world. Seriously just go there for fries alone. You won’t be disappointed.

Bay House is an Asian restaurant on Bay Street of Staten Island, that is gravely unacknowledged. It is a small, hole in the wall type of place that is great to relax with a friend, your family, perhaps even a group of people. It has all of the things I love about Asian cuisine: bento boxes, bubble tea, you name it.

Before going to Bay House, I had never been there before. So as a past vegetarian (not anymore, but I still like anything soy) I was excited to try their Mock Soy Chicken and Broccoli, in a bento box! Plus, I got Mango flavored Bubble tea.

As someone who went to a popular vegetarian college at one point (shout out to Bardians!) I have had my fair share of soy imitations of meat. The Mock Soy Chicken and Broccoli Bento Box came with rice (I chose brown) salted edamame (ah-ma-zing!) and salad. The soy chicken did not leave me craving real chicken. It was flavorful and moist just like the real thing. So real in fact, my boyfriend had a fun time fooling his mom into thinking it was real chicken and broccoli before revealing the truth with my left over portion. The cup of Mango Bubble Tea was the cherry on top of a perfect meal: Tasty and Fulfilling. 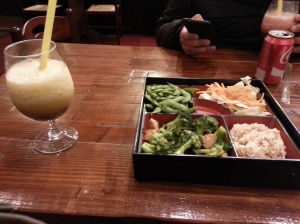 If you’ve never had anything to do on Staten Island before, come to Bay House (it’s right by the ferry). They have Asian food that will satisfy every type of person and every taste-bud, not just vegetarians 😛
**update: March 28, 2017.
Unfortunately this establishment has been closed and another establishment is in current ownership of the same address. I stand by my initial review of this great place to eat. Sad that it is not around anymore. More reason to support small, local businesses!
N. Oliva

City Kitchen opened on March 5, 2015 and it’s opening created buzz from the start. Not only is it an upscale food court, but its in Times Square! With nine vendors jam-packed into this one place, you’re bound to find one good option.

So I tried Luke’s.

I took a picture, but from all the excitement I had pent-up and the enjoyment I had once I got their Crab Roll in my hands, I could not put it down for a minute. Suffice it to say, it was everything Luke’s said it would be, it was succulent buttery crab that left you wanting more – and this is coming from someone who typically does not like anything buttery. Much more, because the whole sandwich was about the size of a hot dog on a bun. And not the bun size kind. I got it with water, a pickle and chips and felt cheated out of $16 when I saw how small the roll actually was. As you can see, I had already eaten the sandwich and pickle before taking this marvelous picture.

Luke’s did deliver on its promise, but it left me wanting so much more. Not another $13 roll (without the extras)